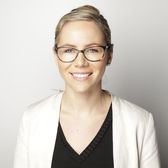 Some might think this week's model sounds a bit gruesome! We are covering a cool fable called The Boi